A glimpse at the chocolate industry 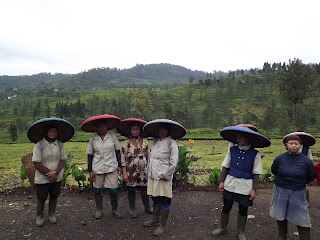 I had been fortunate to make an interesting contact before I went to Jakarta, Mervyn Pereira, who is very knowledgeable about the industry and enthusiastic about cocoa and chocolate in Java in particular. Mervyn had arranged for me to visit a private cocoa farm east of Jakarta and then meet Ani of Delfi Foods, at their chocolate factory in Bandung.

The trip to the cocoa plantation took us a very dramatic mountain pass above Bogor – the car just kept driving up hill. As we continued up, the vegetation began to change and we entered the land of tea – the tea bushes clipped short by constant picking. Over the pass, and we descended into a lush valley of paddy and banana plantations. 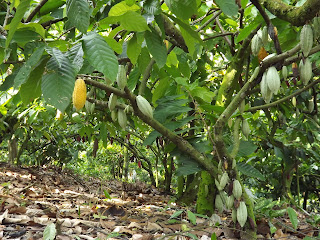 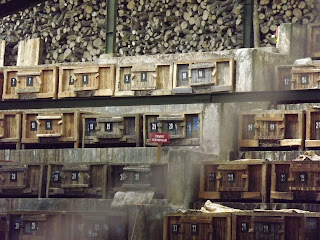 The cocoa plantation was a chance to see a much larger scale enterprise than anything else seen to date. It was large – over 300ha, and quite old – over 35 years. It was very well tended – good clean pods growing on healthy looking trees. Unfortunately, due to a misunderstanding, there was no one there to tell us about it – and it was a holiday and so there was no one around. A young man did turn up and offered to show us around – but as he was in administration – he struggled a little with our questions about the cocoa! He did take us to see the fermentation plant – but did not have the key to the gates – so we had to peer over and through fences to get a look. It was a big set up, and as you can see from the photos, banks of fermentation boxes, stepped so that each day they can be easily emptied into the next box. After six days of fermentation, the cocoa beans are then laid out on racks to dry naturally in the sun. 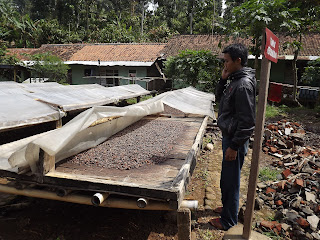 Ani at Delfi is their Sourcing and Sustainability Officer; she is immensely knowledgeable about the industry and was able to tell us amongst many other things, about the Delfi SEEDS (Social Economic Environmental Development for Sustainability) programme. This is a programme working with smallholders in mainly Lampung and Sulawesi on improving both growing practice and fermentation. The lack of fermentation practice is partly a hangover she said from when cocoa first came to Indonesia; it was introduced from Malaysia and so farmers adopted their practice of not fermenting. One of their biggest markets was the US – and there they make chocolate with unfermented beans – that is how they like it!

Ani’s office is in an annex to the main cocoa processing plant, which we would not be able to visit. At the Annex they receive and sort all the beans – going through the first preparatory stages of the processing by cleaning the beans. Ani showed us the huge warehouse – piled high with stacks of beans from around the world – including Cameroon and Papua New Guinea. As all unloading and stacking was being done by hand, the warehouse was strangely quiet – but for the soft noise of the dry beans shifting in the sacks as they are being stacked; it is possible to tell how well they are dried by that noise we were told. 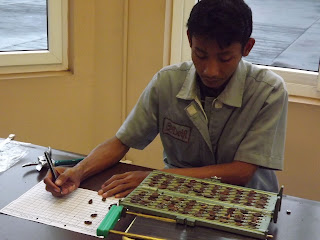 Ani then introduced us to the lab team who check the quality of the beans; they check density, moisture content, the quality – in terms of percentage of damaged or mouldy beans, and for slaty beans – a term I had heard before but had never physically seen what was meant by it. These are unfermented beans – and there needs to be only a certain percentage of these in a batch, otherwise the beans are difficult to process.

Cocoa and chocolate are big business here – both for export and for the domestic market, Indonesia being the third biggest producer of cocoa in the world. Ninety percent of the cocoa is still produced by smallholders and so working with them to ensure continued supply of quality cocoa is an enormous task. SEEDS is just one of many programmes by both NGOs and the big players – such as Delfi and Mars. There are many threats and problems to future cocoa supply though, and I heard more about this the following day.