First steps in bean to bar

My own bean to bar journey started with what felt like a really random event.  I was doing a stall at the Rob Roy Challenge in Kenmore; it had been a slow afternoon and by the end of the afternoon as I was packing up, a couple came over and started talking to me about cocoa beans and chocolate; did I make my own chocolate from beans?  (no, but would love to)  would I like some to experiment with – they have some in the back of the car!  Jocelyn and Aixa have a cocoa farm in Panama and these were their first beans and they were in UK to test the market for fine beans. 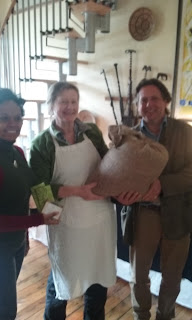 The beans are delicious – just crunching in to one is enough to tell you that they will make yummy chocolate.  So a plan was hatched; I would buy myself a late congratulations present for the awards received earlier that year, invest in a wet grinder, and set aside some time to experiment.  The week of Perthshire Open Studios in September felt perfect; during the week I am unable to do normal production anyway, so could have this bean to bar process take over the workshop.   Visitors could learn about the process, as well as help out if they wished!


I had bought the wet grinder from HB Ingredients, who also had instructions on their website.  They recommended roasting at about 120C for 25 minutes or so, and I had received some advice from Jocelyn and Aixa about roasting time as well.  My plan was to experiment with each batch and see what worked.


First problem; what temperature really was my oven at?  I might set it to 120C but was that the actual temperature?  It is very old – probably over 25years old, a fan oven,  Duffy had told me that they should smell of brownies when done, so we all stood in the kitchen nostrils alert to aromas from the oven.  After 20 minutes we opened the oven to check – were they ‘singing’ (the water in the bean escaping the shell), had the shells come loose?, how intense does the brownie smell need to be?  I was already realising that simple words on a page belied a complex process, and subsequent conversations and research support this.  It is a little like Mrs Beeton  simply and helpfully saying ‘first take your rabbit’. 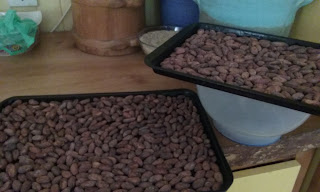 So fearful of over-roasting (number one cardinal sin) we pulled the beans out after 25 mins.  In the second batch I kept tabs on the oven temp with a thermometer and learnt that the oven was far cooler than the dial was set to.

If I thought ‘roast the beans for 25 mins until they smell of brownies’ was an understatement I was soon to learn that ‘peel and winnow the beans’ was an even greater one.  We followed HB’s instructions to crush the beans in a bag with a rolling pin – easy enough – but then were faced with this ‘Aesop tale type task of removing the shells and separating the broken cocoa beans from the papery covering.   The shell did not leave the bean as easily as was intimated; we ended up peeling them.  There were hidden pleasures in this – when you manage to keep the whole bean entire and reveal a beautiful dark shiny complete bean rather than have it crumble into nibs in your fingers.  They looked like chocolate pecans almost, little convoluted folded coyledons of the new seedling.  Such small triumphs though did little to diminish the tedium of peeling those beans.  This was fast becoming a sticking point.

At least in hand peeling we were able to separate most of the papery shell from the nibs; Aixa had asked if we could keep the shells as the folk in Panama infuse them in rum to make a liqueur (this in itself is enough to keep you going?).  However, there were lots of fragments mixed in to the nibs and we needed to winnow them out.  The HB oracle suggested a hair dryer and without really thinking about it – I thought the skins would be lighter and just blow away – I started to ‘mimic’ winnowing I had seen in Africa and Nepal; pouring the grain from one container to another but from a height  so that the wind would carry the lighter stuff away and the heavier would fall into the waiting vessel.  Only the wind was replaced by a hairdryer – clearly my first mistake – a bit like winnowing in a typhoon!  The skin did fly away, but so did the nibs!  The workshop covered in cocoa nibs and skin – after all that tedious peeling!  So, I turned to the fan, but this was not strong enough to blow anything away.  I looked on the internet for more advice and read about the ‘dogbowl’ technique.  A deepish bowl, blow air into it and the lighter stuff comes up over the edges.  This worked to a degree but I still found that the smaller nib pieces were as light as the shells and I seemed to be losing a lot this way.  ‘Winnowing’ never has such a simple concept been so misleading.  NO wonder those winnowing machine cost so much!

After all that – the rest is actually simple and straightforward; the machine takes over.  The machine is extraordinary – I could not believe how well it worked – it just kept going – whirring away in the corner of the room in a quiet competent way.  I am in love with it – machines that do what they are supposed to and don’t make a fuss, after all that peeling and winnowing, calm was restored and we just had to wait and see.


Within a few hours the chocolate paste was a little gritty but very liquid and a beautiful colour.  I had to keep checking the temperature and using the hair dryer to bring it back up to over 45C.  I positioned table lamps over it in an effort to warm it but of course modern low energy light bulbs do not give off much heat!  I dug out an old heat lamp that we had used to nurse some chicks with – but the heat was too low to make much difference to the chocolate, but did keep it between 45 and 50 – and gave a beautiful glow.  At the end of the first day, after about 4 hours of grinding – we had a light gritty and a little unpolished tasting chocolate – but it felt like it was on its way.  I did not want to leave the machine on overnight so turned it off and emptied the chocolate out.

We set it to grind again at 8 the next morning, and by mid morning was amazed to discover that the grit had gone – it was smooth!  I knew that  it would need considerably more grinding and tried to increase the temperature as much as I could to ‘conch’ the chocolate, but could never really get it any higher than 55C, and that was with holding the hairdryer which I could only do for a limited time!  The chocolate kept warmer if I kept the lid on, but I thought I would not get any of the loss of off notes that I had read should happen in the conching process – so even though I could not get the temperatures – just the warm, constant turning and open to the air might do that.

We did this through to day 3, another 12 hours in the machine and then I was eager to get on with a second batch and decided to call it a day.    From 1500g of beans, we had created 1000g of chocolate – an 80% having added only a small amount of sugar.  I tempered it and moulded into small 5g caraques and 30g bars.  And could barely wait the few hours till it could be turned out and eaten.  Our very first made from scratch chocolate. 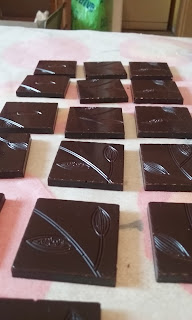 It is the most transformative process; on subsequent days that week, I was able to offer people the original unroasted bean and then a taste of the chocolate made from it.  It is hard to bridge the gap between the two – how did one transform into the other?  We made two more batches that week, experimenting with roasting times and also with the degree of winnowing.  The second batch we meticulously peeled and separated; the third batch was much more slapdash.  I have subsequently had conversations with others about peel and indeed the ‘stalk’; the peel contains any contaminants, it has some fat but not much and so reduces the ratio of fat) it has many of the off notes.

But on the whole I am pleased with what we did; I love the chocolate itself – which is full of flavor and not too bitter and is a lovely texture.  I took samples of it to Olympia (see The Chocolate Show post) and tested it on some of the experts, who were nice enough to try it and give me feed back;  we all agree the beans are wonderful, the temper was good (one thing I can do!), a little over roasted maybe – but on the whole – a good start
at October 29, 2015

Email ThisBlogThis!Share to TwitterShare to FacebookShare to Pinterest
Labels: bean, bean to bar