The prickly case of Gorse flower and that elusive scent 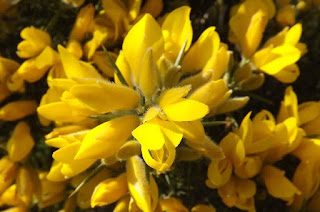 I am sure you are familiar with that wonderful heady coconut aroma that hangs heavy over a patch of gorse, resplendent in gold yellow flowers in early summer?  It has teased me over the years - I have tried to capture this in chocolate for a number of years now - all to no effect.

It is a prickly challenge as well - gorse (Ulex europaeus) flowers are tightly clumped on prickle covered stems.  Picking them requires precision; wearing gloves makes fingers too clumsy to remove the flowers, and I realise that my little finger is raised as if drinking tea with the Queen, as I focus on using thumb and forefinger to pluck out the flower, and attempt to keep my other fingers as far as possible from the needlelike spikes.

Undaunted, each spring I watch out for a good sunny day, dry and warm, hopefully building up those gorgeous aromas.  I seek the most aromatic shrubs, and set to with my prickly task.  I take the flowers home, still warm from the sun and immerse them in melted cocoa butter in an effort to capture that fabulous flavour.  I know it will work well with chocolate - we all know coconut works well with chocolate!

I have left these flowers to infuse for varying amounts of time - from hours to days.  Leave them too long and they start to rot a little - not a pleasant concept; but all to no avail - all I get is a cocoa butter with a slight floral teint.  No coconut.

So I tried infusing in cream for a ganache; again, no coconut.  I have been doing this every spring since I started making chocolates!  A couple of years ago, I came across Chocolarder, a chocolate maker  in Cornwall who uses gorse flowers to flavour chocolate - and it was just as I imagined it would be; lovely coconut macaroon flavour.  I wrote to the chocolate maker, and he introduced me to a new word 'enfleurage';  on looking this up I realised that this was a fancy name for what I had been doing already - but there were a number of ways of approaching it and I had only been practising 'hot enfleurage';  there was a cold version as well - maybe this was the solution?

The following year, brimful of optimism, I tried this alternative technique; picked flowers and laid them between thin wafer layers of set cocoa butter.  Left them for a week or two - but wildly disappointed to find that there was still no coconut.

I began to wonder whether we had a sub-species of gorse in this area that has no aroma; or maybe the weather never gets warm or humid enough?

One last try this year, and a glorious warm spell of weather in May - surely this must have been ideal?  But no - I was to be disappointed again.  In one last attempt I tried a ganache - a cream infusion of flowers, combined with milk chocolate.  As I feared, no hint of coconut, but this time, maybe because I was giving up on coconut, I allowed myself to just taste the resulting ganache and stop focussing on one flavour.  I realised that the ganache tasted like honey, with a slightly peppery edge and full of caramel.  It was amazing!

I have introduced it into the early summer selections and it has been very well received; and conversations with customers about it have revealed that I am not the only one that finds the coconut aroma elusive.

So lesson learned; I need to taste with an open mind, and don't fixate on one flavour. Here's to next year's gorse season. 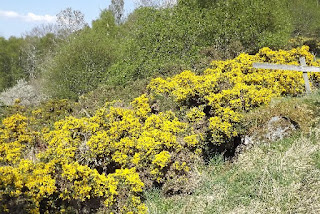