A bamboo chocolate factory and no references to Willy Wonka anywhere!

In Bali, and I am a serious disappointment to the local tourist trade. I don’t want to go to a spa, lie on a beach, sit by a pool drinking cocktails (always seemed so exotic – but when actually offered it, it somehow did not appeal!), don’t want to go to a monkey sanctuary, or an elephant one either for that matter, or ride around on a jetski, or watch civets ‘processing’ coffee beans. All I want to do is meet some cocoa farmers!

I had managed to organise at least two meetings before I came here – one with Big Tree Farms, and the other with Rainforest Alliance.

The visit to Big Tree Farms was my first excursion in Bali, and I must admit I was not expecting the tedious traffic – the distance travelled was not that great, maybe 30 to 40km – but it seemed to take for ever. I don’t think the taxi driver ever got higher than 3rd gear – it was so bumper to motorbike to bumper. The roads were lined with shops, houses and temples – so even if we were travelling through the countryside there was no real sense of it.

The directions we were given were to ‘turn left at the second giant tree’; we were a little skeptical about this at first – how would we know the first giant tree to be able to see the second? What constituted ‘giant’? However, it was very clear when we got there – a first huge beringin or banyan tree (Ficus species) appeared on the roadside and soon after it a second. Down a short track and there was the bamboo chocolate factory! 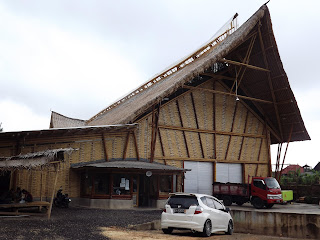 This is the largest bamboo structure in Indonesia and possibly the world – and very probably the only bamboo chocolate factory. It is a magnificant structure, and well organised inside with warehouse, manufacturing space and packing rooms on the cool ground floor, a whole suite of offices on the first floor and then a wonderful open ‘reception space’ on the second – looking out over farms below. I was shown around by Afi, a fantastic guide – and although only the second week into her job was both knowledgeable and enthusiastic about Big Tree Farms’s programme. One of the aspects of the building design was ‘transparency’ – a founding principle of the company – and so all internal walls to offices, processing rooms, etc are made of glass.

Big Tree Farms, as you can see from their website, work with a number of products – cashew, coconut palm sugar, as well as cocoa. They work with farmer groups and the focus is to increase the value of their crops to improve their livelihoods. They have established processing plants where farmers can bring their pods and learn how to ferment the beans for the chocolate market, thus adding value to their crop. They then solar dry the beans at the processing plants, to the required moisture content and then sell their processed beans on. This programme has been very successful in Bali and they have now extended it to Aceh, far away on the north-western tip of Indonesia. 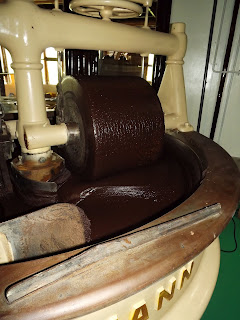 Afi then showed around the factory. They make only raw chocolate at the moment – this is chocolate made from beans that have not been roasted; the raw food principle is that food should not be heated above 50C, and so fermentation of beans is OK as this is kept just below about 49C, but roasting of beans is not. They have a magnificent melangeur, in which they grind the cocoa beans (having removed the papery skin around them); this sat in the corner churning away, producing a very luscious looking shiny dark brown ‘liquor’. This is a cool process, in line with raw food requirements; the liquor is then transferred to another machine, where sugar is added, and this then continues the grinding process taking the cocoa solid particle size down to about 24 microns. This then is tempered and molded into bars. And there in a corner, was a woman polishing away at the moulds – just like I do! 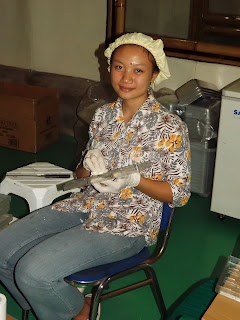 The raw chocolate was interesting – quite fruity and caramelly in taste, but actually the cocount plam sugar that they use has a very strong caramel taste – so not sure if that was where it came from. The cocoa nibs – just broken cocoa beans, again un roasted, were very good – really nutty and moreish.

So, down to business – would I be able to source some beans from them? It turns out that it is the wrong time of year to find beans in Bali! The harvest period is April through to November – so no Bali beans available. However – they are harvesting in Aceh and they would try and get me a sample of beans from there before the end of the week.

A big thank-you to Afi and Wawan for their time and assistance.