I was put in touch with an interesting contact here in Bali, and a meeting with the chair of a farmer group was set up for me. There was initially a reluctance to arrange this meeting, as at this time of year there is no cocoa being harvested and the only cocoa pods around might be old or ‘ugly’; no-one wants a visiter to think badly about the quality of their cocoa so with the reassurance that I would understand and not judge them on ‘ugly cocoa’, the meeting was set up.

The usual traffic battle to get there – this time further complicated by an accident. Once out of town and heading west we were on the highway that takes you to the far north west tip of Bali, where this is a ferry to East Java. Slamet, the driver, is from East Java and so knows this road well. He has galaxies worth of patience as well – still loads of cars and motorcars, but now on this important trade road – joined by lorries and buses. The road is quite hilly as well – reminded me of driving in Devon and Cornwall when I was a child – just stuck in endless lines of slow moving traffic. I think Slamet did reach the heady heights of 4th gear once!

As we headed west of Tabanan we began to see more of the countryside; bridges crossed wooded, deep river gullies, we even began to see mountains in the distance. And when we left the main road and headed off to the cocoa village – the countryside suddenly opened up. It was magnificent – beautifully sculptured terraces of young rice, bordered by coconut, banana and cocoa trees! The road meandered through small villages, each gate with a tall bamboo pole outside, decorated with banana leaf and palm frond garlands – looked very festive. As households here are bounded by a high stone wall, and the verges are cropped grass, the village has an English country feel to it.

We were met at the cocoa processing unit by N Wijana, the chair of the local subak abain (dry farmers group – referring to plantations rather than the wet farmers group that co-ordinates rice production), I Wayan Muliasa (Agriculture Extension officer) and Idewa Nyoman Alir Sastrawan (an export trader). To my delight, Wijana spoke impeccable English – learned through his long years as a tourist taxi driver. He is a great football fan – and ‘visits’ the UK every Saturday and Sunday when he watches the football. His favourite team is Man United, and he is eager for the day when Indonesia has a world class team.

Anyway, back to cocoa! The subak is a farmers group that aims to support farmers in getting the best out of their farms. They have been growing cocoa for some years now and traditionally did not ferment the beans. The government have been encouraging farmers to increase the value of their crops – both through fermentation, but also advice on planting, crop improvement and managing diseases. They even provide loans for subaks to develop these production units. 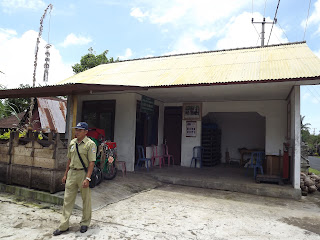 This production unit has been operating since 2007, and they are producing good quality fermented beans – they have always reached the standard required of them. Here they buy pods from the farmer members, ferment and dry them, and then sell them on. I was shown yearly yields from 2007, which range from 5,000 to 10,000kg a year of fermented beans. Due to mobile phone technology – farmers are able to check global cocoa prices when they sell, and so are able to get prices at about 90% of the international price – and are in a good position to hold out for a decent price. However, the price difference between fermented and unfermented is not actually that great, and is often not enough to encourage farmers to put in the extra work to ferment.

The government is encouraging farmers to increase value – but various factors in the market chain keep the fermented price low. For example, to ensure value is added to cocoa within Indonesia – there is a tax on the export of unprocessed beans; so the cocoa industry extracts cocoa butter an d cocoa from the Indonesian crop and there is no tax on the export of these products. However, fermented beans do not count as processed and so when these are exported there is a 15% tax imposed. This keeps the price of fermented beans low, and the differential between the two types too small to attract farmers to change their practice. 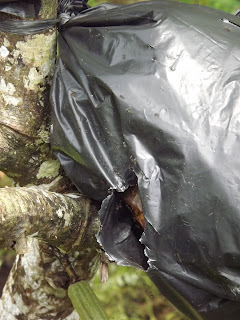 We walked through a nearby cocoa grove; no ugly cocoa here thank goodness! Lots of flowers, and Wijana explained the presence of the black plastic bags on the trees. These are full of dry leaves, and encourage black ants to nest in the trees. They then keep the pod borers away – so a simple form of natural pest control. These farms are not yet certified as organic, but are interested as they are reducing their use of chemical pesticides.

So, would they be able to sell me cocoa? Yes – as long as the price is right! They were initially fearful when my visit was first mentioned as they thought I might want far more cocoa than they produce – but relieved to hear that I am only interested in 100kg or so. So come next harvest, they will find a way to send me a sample and we will see!

It was a fascinating morning and my heartfelt thanks to Wijana, Wayan and Nyoman. 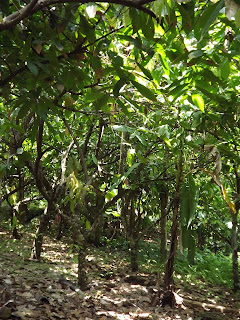